Louisiana is the world’s highest incarcerator by both rate and population, and it appears the state’s prisons are going to the most extreme measures to ensure that it forever remains at the top. According to a recent class-action lawsuit, inmates in one of the state’s many overpopulated prison warehouses who should be so unfortunate as to have thought about or attempted suicide are being punished for their attempts by being chained to wooden chairs, placed in solitary confinement for years at a time, and exposed to extremely cold weather by their overseers. 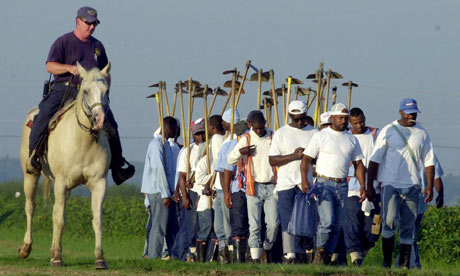 At David Wade Correctional Center in Homer, which houses a population of about 1,244,“prisoners who ask for mental health care instead are placed in suicide watch, stripped of their clothing and held in solitary confinement on a disciplinary tier for weeks.” From there it only gets worse. According to The Advocate, “Prison staff members respond to symptoms of mental illness by using chemical spray on inmates in their cells; taking away mattresses in clothes so prisoners must sleep on concrete in paper gowns; and opening windows to make it even colder in suicide watch cells.”

One claim put forth by prisoners is not an uncommon one in Louisiana prisons, where inmates are treated like wild beasts instead of people regardless of how minor their alleged offense. In a jail in New Iberia in 2011 officers beat inmates, forced oral sex simulation on batons, and hit inmates in their testicles. The following year an inmate was brutally “thrown on the ground, attacked by dog” and stomped on by an Iberia Parish deputy. In the Homer prison “mentally ill prisoners were forced to kneel or bend down and bark like dogs to get food.” A mentally ill prisoner who “mutilated his genitals, cut his wrists and tried to kill himself by jumping over barbed wire” onto concrete was disciplined and punished severely for his many attempted suicides instead of being given mental health treatment.

According to the lawsuit, “Due to the lack of human contact and uncontrolled mental illness, many will scream, laugh and talk to themselves. Others rock in place or deteriorate to more severe manifestations of their conditions, such as smearing blood or feces.” Instead of inmates being punished for trying to escape these hellish conditions by any means possible, it should be the prison officials of David Wade Correctional Facility who should be publicly exposed to an International Tribunal and tried for Crimes against Humanity.