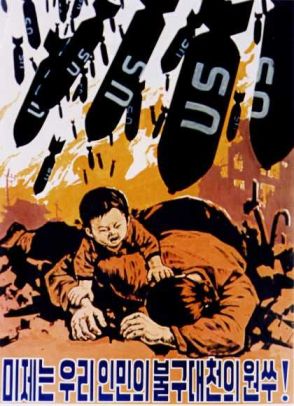 How do North Koreans envision the United States? Were the incredible, mind-blowing documentary film Propaganda to be believed, the answer would be “much more accurately than Americans view North Korea.” The documentary, which was anonymously uploaded to YouTube in 10 parts in 2012 by someone using the moniker ‘Sabine’, covers everything from Westerners’ obsession with celebrity culture, to the CIA’s Operation Paperclip which made America into a safe haven for Nazis after WWII, to the creation and testing of biological weapons by armies in the West against their own people. It is in essence a study in how governments, particularly that of the United States, use propaganda to keep the masses ignorant of the true causes of war, and to distract them as they are being robbed and controlled by their corporate masters.

When the movie was first uploaded, ‘Sabine’ claimed to have received the documentary from North Korean defectors in Seoul. As it turned out, this was all a rather unique and clever ploy to draw attention to the film, one that worked like a charm as it garnered more than a million views on YouTube. The documentary did not originate in North Korea at all, but in New Zealand. It is the brainchild of director Slavko Martinov, who decided to come clean in 2013. Regardless of where this extraordinary film originated from, one thing remains certain. The information presented in the narrative is 100% verifiable fact, even if most of the facts presented here will come as a shock to the majority of viewers in the West. Anyone who watches the 2 hour documentary below is guaranteed to learn something they were not aware of before:

Although the DPRK did not in any way, shape or form have any involvement in the creation of the film, one can’t help but walk away from it feeling a certain amount of understanding as to why North Korea has been so defiant in the face of nonstop imperialist aggression over the past 60+ years. Particularly telling is the line that comes at around 51:00 in the above video, when the narrator is discussing the ways in which prominent Americans such as Prescott Bush (father of George H.W. Bush and grandfather to George W. Bush) and John D. Rockefeller, along with members of the British royal family, provided financial support to the eugenics initiative that formed the basis of Hitler’s “racial hygiene program.”

“Horrifyingly, today the Rockefeller family, the U.N. and World Health Organization remain at the forefront of administering population programs designed to reduce world population to more manageable levels. One can only imagine what terrible ideas these monsters have in store for us.“