Muhammad Ali truly exemplified Black Power in every sense of the term. When he was forced to choose between preserving his career by being a so-called “patriot” and reporting to duty in Vietnam, or risk losing it all and being incarcerated for following his conscience and publicly resisting the draft, he chose the latter. In his own words,

“My conscience won’t let me go shoot my brother or some darker people or some poor, hungry people in the mud for big, powerful America. And shoot them for what? They never called me nigger, they never lynched me, they didn’t put no dogs on me, they didn’t rob me of my nationality, rape and kill my mother and father. Shoot them for what? How can I shoot them poor people? Poor little black people and babies and children and women. How can I shoot them poor people? Just take me to jail.” — Muhammad Ali 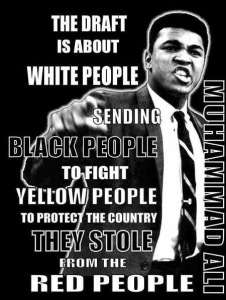