One of the most absurd examples of just how far police departments around the country are willing to go to prevent people who get caught in America’s massive “criminal justice” system from ever moving on is the tragedy now known as #Pointergate. The controversy erupted when local Minneapolis TV station KSTP ran a hit piece smearing Democratic Mayor Betsy Hodges, saying she was “showing solidarity with gangs” by posing for a picture with a young Black man who was pointing back at her. The ridiculous story was fed to the station by local police unions and KSTP ran with it, doing no investigative work of their own and having not even the decency to question how such an innocent gesture could be interpreted as a “gang sign”. But the police union refuses to back down, even going so far as to insist that “the mere existence of [the picture] could put the public and possibly police in danger” in the words of John Delmonico of the Minneapolis Police Federation. Former officer Michael Quinn did not mince words when he complained that Mayor Betsy was “legitimizing these people. She is legitimizing gangs who are killing our children in Minneapolis and I just can’t believe it. It hurts.“

So just how dangerous is this picture that police say puts public safety at risk? Let’s have a look: 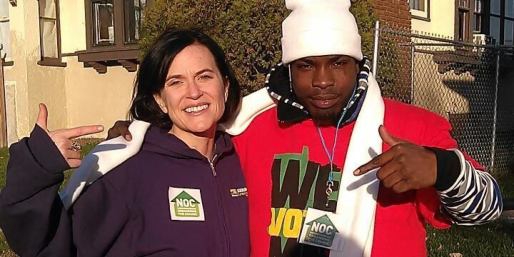 For those who are wondering, the man in the picture has never been affiliated with a gang, nor was he making a “gang sign” or gesture with his hands in the photograph with the mayor. The 23 year-old, whose name is Navell Gordon, has been previously jailed for non-violent offenses, though that hasn’t prevented the state from robbing him of his political rights. Gordon refuses to let the system break his spirit, however, and has been working for the past 2 years for an organization called Neighborhoods Organizing for Change which advocates for the rights of the economically disadvantaged.

Police unions were attempting to use the picture with Gordon to attack Mayor Betsy Hodges because of words she wrote in an op-ed critical of, in her words, “Some officers [who] abuse the trust that is afforded to them and take advantage of their roles to do harm rather than prevent it”. That is the line that drew such ire from cops, motivating them to launch a campaign to defeat her with smear tactics. For her part Mayor Hodges is not backing down and has shown no indication that she intends to start catering to the demands of the racist thugs who make up the police unions now, nor will she succumb to the falsehoods propagated by pro-police “news” outlets like KSTP.

By far the best reporting on this story was during last week’s episode of the the Melissa Harris Perry Show, which featured Gordon himself to offer his own take on the situation:

KSTP was widely panned for propagating such a bogus story. However, if the station’s recent behavior and the obvious lack of integrity of its reporters are anything to go by, this will not be the last time KSTP unleashes a campaign perpetuating racist stereotypes at the behest of the Minneapolis Police Federation. Look no further than the response to the controversy by Jay Kolls, the apparent white supremacist masquerading as a “reporter”, who continues to defend his debunked story on Twitter: