Ever since Ferguson, Missouri arrived on the international radar back in August after police officer Darren Wilson shot and killed 19 year-old Michael Brown in cold blood, most of the focus has been either on the various demonstrations carried out by protesters from the community, or on the repressive tactics employed by the police forces in their attempts to quell voices of dissent. What hasn’t received nearly as much attention is the significant amount of animosity St. Louis’s white residents apparently have for the local Black communities. The New Republic was the first publication to take a significant look at this, and it was soon followed by polling data taken as part of a Pew Research survey. Indeed, one is hard pressed to find a forum online where the Mike Brown case is discussed – be it Pinterest, Twitter or Facebook – that doesn’t include at least one white person claiming to be from St. Louis assuring everyone, “You just don’t understand what those people are like over there” and how they need to be “kept in line” by the police. (These comments are inevitably followed by, “I am not a racist!” or “This is not about race like you guys are trying to make it all about.”) But what is most illogical is that these are often the very same people who rail nonstop against an approaching government tyranny, yet when an unquestionably clear case of government tyranny arrives right next to their doorstep they are the government’s trusted accomplices. Despite an enormous spike in gun sales in St. Louis after Ferguson residents rebelled against the police refusal to arrest Mike Brown’s killer, none of the NRA people arrived in Ferguson to show solidarity with the people. They didn’t show up threatening to exercise “Second Amendment remedies” as a means of protecting the constitutional rights of their Black neighbors. What makes Cliven Bundy and his cattle so worthy of protection whereas the people of Ferguson receive only scorn? Why are the residents of Ferguson lectured and told to “just do whatever the police tell you to do” so they won’t get hurt, whereas Cliven Bundy is said to be protecting the land that rightfully belongs to him?

The level of nastiness in the white community reared its ugly head last week outside the St. Louis Cardinals game, where protesters had peacefully assembled to make their demands for justice for Mike Brown heard. The amount of hostility shown towards these young African American protesters by the mainly all-white crowd looked for some like a flashback from a different era. The crowd openly derided and taunted the demonstrators, showing them a level of disrespect they probably wouldn’t even show the Westboro Baptist Church. First there were the typical slurs, stereotypes and insinuations that racist whites instinctively dredge up anytime they want to vilify a group of Black people. Shouts of “Remove you hat!”, “Pull up your pants!”, and “crackhead!” were at different times hurled at the young people who were simply calling for justice to be served. One man, claiming to be a St. Louis police officer, said he was going to “fuck them up”, and he was cheered on by a number of people in the crowd. 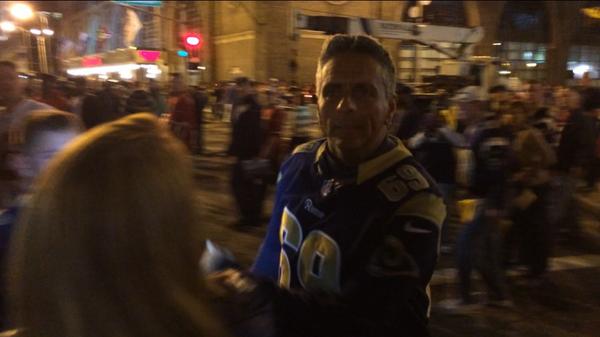 This man ran into the crowd, with his young son pulling at his shirt yelling, “St. Louis PD Baby!” pic.twitter.com/2G0AIlbAPL 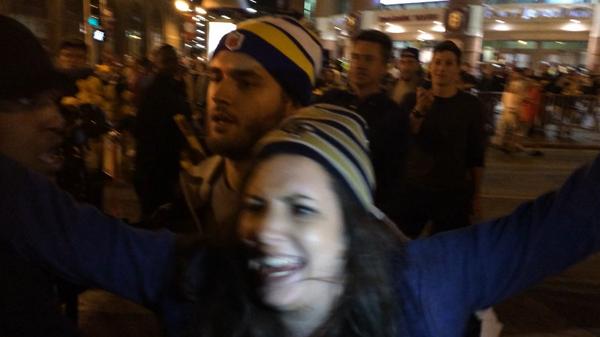 An angry fan nearly attacked a protester. Her boyfriend, who took a swing on someone, dragged her away. pic.twitter.com/xvdqqS1u7l

Clearly the whites in the crowd were uneasy with the fact that Black people were raising their voices in opposition to the racially-biased “criminal justice” system in America. As protesters called for “Justice for Mike Brown!” they were met with chants from a group of white men in the crowd: “Let’s go Darren Wilson!” An older white man said in clear view of a camera, “If they’d [the protesters] be working we wouldn’t have this problem.” This is just a repetition of the usual racist stereotype which holds that Black people are lazy and do not want to work, a stereotype white people have literally been peddling since the days of slavery (when Black people were doing backbreaking manual labor every second of the day for no pay. The stereotype of the ‘lazy black’ does not now nor has it ever held any merit.) Interestingly it is assumed the protesters do not work simply because they’re outside the stadium protesting, yet the people attending the Cardinals game aren’t exactly working themselves. They’re just standing in line waiting to go see the baseball game.

Another white woman decided to take issue with an upside down American flag that someone was carrying, a symbol of a country in distress. “It would help their cause if they’d take that flag away… This is not the way to help your cause,” she says, as if an upside down piece of cloth is more offensive than the hellish nightmare America has created for Black and indigenous peoples over the past 500 years. “Show a little respect for your country,” shouts another woman, before irrationally yelling to the group of Black demonstrators, “We’re the ones who gave all of y’all the fuckin’ freedom y’all got!” Following this declaration of white saviorhood, another very angry man shouts at the protesters (who are still remaining peaceful and showing no signs of aggression), “I’ve got family who died for that flag!” As tragic as it is that his family members have, in his words, “died for that flag”, this does not erase the reality that millions more have died precisely because of the racist imperialism that the flag represents. Rather tellingly this same man, who just moments earlier was chanting pro-Wilson slogans and calling on the protesters to “show a little respect”, tries to intimidate the them by making violent threats. “If I see you out in the streets you’d be on the ground. That’s what you would do. You know it and I know it. If I see you in the street you’d go down on the ground… You ain’t tough. You’re gonna get your ass whooped.” The lynch mob mentality is alive and kicking in 2014.

One ignorant woman said quite honestly to a Black United States Military veteran who was among the demonstrators , “I don’t understand why you’re here.” Unfortunately she didn’t stop there, and continued on by insisting “I don’t believe you’re a veteran. What are you,” she demanded to know. “I’m a marine” came the reply. “OK … from … uh … what … what level?” she continued to prod. The man responded by informing her that the Marine corps is a branch of the U.S. Armed Forces. “I know it. But how far did you get?… What rank are you?” Finally the man tells her bluntly, “Don’t ask a vet how far did you get. I made it back alive. That’s how far I got.” (Btw, African Americans “are the only racial group in America that is overrepresented in military service“, though this overrepresentation is not at all repricocated when it comes to high-level positions.)

Earlier in the day there was also a man standing atop a balcony near Busch stadium who was caught on video making lewd and obscene gestures at young protesters:

Such instances are far from aberrations. There have been a number of pro-Darren Wilson rallies held mainly in St. Louis, where “Support Darren Wilson” t-shirts and “I am Darren Wilson” wristbands sell out fast. These wristbands have even been visibly worn by none other than the very law enforcement officers sent out to patrol the streets of Ferguson. Only after the Feds stepped in did the police chief decide it was inappropriate. (Feds: “Hey, you’re being way too honest about who you guys really are and what your agenda is! You’re supposed to be more subtly racist like us.”)

At a pro-Darren Wilson rally in August, one woman declared that she “would no longer live in fear”, while another man accused Ferguson’s residents of committing “inhumane terrorism.” 33 year-old Michael Bates attended one such rally and declared:

“If you do what the police tell you do — if you’re not doing anything wrong, and the cops ask you to do something, then you’re not going to have nothing to worry about”…

When asked why the pro-Wilson rally didn’t have many African-American attendees, John Newshaw, a retired St. Louis County police officer, said, “This sounds wrong, but I don’t think the black community understands the system. Again, there’s a process. They’re screaming about, why isn’t he [Wilson] arrested, why isn’t he in jail? Well, without the investigation being done, you can’t go and apply for a warrant.”

The opposite is true. The Black community understands better than anyone in this country how the system works. They, unlike many whites who are either collaborators with the system or just sheep, know very well that the so-called “justice” system in this country is rigged to solely protect the interests of the wealthy and most powerful. Newshaw’s comments didn’t end there however. He continued:

“There’s no reason to stop [cracking down on protesters]. … It’s as simple as training your dog. If you don’t tell them stop biting, guess what, he’s going to continue to bite.”

And there you have it. This pig admits he essentially views the people of Ferguson as dogs, yet he was once a police officer entrusted with “enforcing the law”, supposedly without bias.

“If everyone just stopped with the racism thing, it’d all just go away and everything would go to court and come out with the way the law is supposed to do it. Rioting and everything in the streets doesn’t get anything done,” [Newshaw] said.

In other words, please don’t offend the sensibilities of white people by mentioning race, especially when it comes to issues like racially-biased policing and sentencing. The only time race is appropriate for discussion is when police feel the need to justify policing certain communities more than they do others.

Meanwhile white supremacist groups and racists in general have raised a combined total exceeding $400,000 for Officer Wilson‘s cause. What he needs it for is anyone’s guess, as he has been on paid vacation since early August and has friends at every level of government moving heaven and earth to ensure he will never be held accountable or prosecuted. What’s worse is that the website GoFundMe has sent Color of Change a “cease and desist” letter simply for campaigning against the site’s hosting a fundraiser for an officer who killed an unarmed citizen. Here are just some of the vile, gut-wrenching comments left by Darren Wilson’s supporters on the fundraising website:

Given the extreme amount of hostility held by many of St. Louis’s white residents for Ferguson’s Black community, does it really make sense that the super secretive “Grand Jury” tasked with deciding whether or not to indict Officer Wilson is 75% white?! I’m not optimistic they will make the right decision. And even if they were inclined to bring an indictment, it doesn’t seem very likely the authorities would allow them to proceed with it. America’s true colors are once again about to be revealed for all to see. Red is for the young blood spilled at the hands of cops everyday, white is for the innate sense of white supremacy white children are indoctrinated with from birth, and blue is for the the indomitable Blue Code of Silence that makes the former possible.