LAPD Newton Division’s “Gang Enforcement Detail” Officers Sharlton K. Wampler and Antonio Villegas are the cops responsible for shooting Ezell Ford to death in South Los Angeles last month, according to a press release from the Los Angeles Police Department. The release of the names comes a full two weeks after the two cops shot and killed the unarmed 25 year-old in his own neighborhood as he laid on the ground on August 11, even as he complied with the officers’ demands. Much like Darren Wilson – the Ferguson cop who murdered Michael Brown (another unarmed young Black man gunned down by cops in his own neighborhood) – Wampler and Villegas were likely given the chance to flee and go into hiding. Also like Wilson, both officers are now on paid vacation.

Contrary to what the LAPD may want to claim, they did not release the names of the officers to members of the Ford family or to the public for that matter out of the goodness of their own hearts. After weeks of protests, the department only decided it was important to let the community know the names of Ford’s killers after a political blogger, Jasmyne Cannick, leaked the names of 2 LAPD officers on her website after much hesitation. As she wrote in her August 27 post,

I hadn’t revealed that information up until now because I had hopes that the Department would do the right thing and tell the community in a timely manner.

Unfortunately they did not, so Cannick went public with the information. (*) Whoever the source of her information, they were at least partially on the money, as the name of Sharlton K. Wampler was indeed 100% accurate. The second name her source relayed to her was not Antonio Villegas, however.

Two days later the Department came forward naming Wampler (who makes $104,113.44 annually for his “policing”) and Villegas as the officers involved in the shooting, though they would not acknowledge that Jasmyne’s blog post was a motivating factor in their sudden willingness to be more forthcoming. Instead, their excuse was that they were worried about “potential threats to the safety of the officers.” Both officers it turns out are veterans of the Los Angeles Police Force, Wampler with a whopping 12 years under his belt and Villegas with 8. As far as the rest of the specifics regarding the case, the entire department is keeping a tight lid. All we have is a shaky account given by police that doesn’t at all match with the eye witness testimonies of neighborhood residents.

It’s important to point out that the police themselves are unable to provide a reason for why they stopped Ezell Ford in the first place, saying only that he was walking on the sidewalk and appeared to be making what they referred to as “suspicious movements”. (Note: Michael Brown was supposedly stopped and shot because he wasn’t walking on the sidewalk. Is there anywhere that young Black men can walk without having to be stop, questioned, harassed and brutalized?) This appears to have been part of a “routine stop” this particular department conducts on a regular basis in and around the neighborhood. They involve police officers randomly stopping, frisking and violating Black people in their own residential neighborhoods, searching for anything at all they can find. Members of the community say it happens almost daily, and they are sick and tired of the cops being there more often than not for the purpose of harming them instead of being their to protect them. One eyewitness even saw the same officers who would shoot and kill Ezell Ford in the neighborhood the night before Ford’s life was taken. He says they were harassing him, despite knowing that Ford, as one neighbor put it, “wasn’t all there”.

According to the police version of events, Ford out of nowhere decided he was going to “struggle” with one of the officers right before he “attempted to remove the officer’s handgun from its holster.” If we are to believe their story, then we are also supposed to take it as a given that this was justification enough for them to fire multiple gunshots into the young man’s body and killing him. Needless to say the cops’ story is disputed. In the words of LeRoy Hill, who saw the entire incident go down, “They had him in the corner and were beating him, busted him up, for what reason I don’t know; he didn’t do nothing… The next thing I know I hear a ‘pow!’ while he’s on the ground. They got the knee on him. And I hear another ‘pow!’ No hesitation. And I hear another ‘pow!’ Three times.” When Ford’s mother Tritobia Ford rushed to the scene to see what happened, the cops raised their batons at her in an attempt to intimidate her. Not once did they ever try to console her. Another witness is quite clear of the fact that he heard the officer who was pinning Ford to the ground yelling out to the other officer, “Shoot him!” After that, “three bullets were planted in Ford’s back while he was lying on the ground.” Rather tellingly the cops did not have a dash-cam mounted on their patrol vehicle at the time Ford was shot.

The fix is already in. While the autopsy results are being withheld from the family and the public, both officers are on paid leave as the “internal affairs” committee conducts its erroneously titled “investigation”. Time and again, we see that internal affairs investigations are nothing more than a farce used to justify a subsequent acquittal. And the department’s smear campaign against the victim (who they keep referring to as the “suspect” whereas the officers who killed him aren’t in any way “suspects”…) went into immediate effect.

In a familiar attempt to smear a young Black man’s reputation by stereotyping and demeaning him, the department issued a completely irrelevant statement declaring, “It is unknown if the suspect has any gang affiliations.” (**) While this statement simply says it is “unknown”, the insinuation is that he does despite not a single shred of evidence for this being the case. On another note it is also unknown whether Officers Sharlton K. Wampler or Antonio Vellegas have affiliations with the Ku Klux Klan or other white supremacist organizations. Nor can it be said with 100% certainty that the LAPD is not an undeclared chapter of the American Nazi Party or is not affiliated with other neo-Nazi fascist groups.

This isn’t even the first time Sharton K. Wampler has terrorized innocent civilians. In August, 2009 he and LAPD Officer Alfred Garcia invaded the Hernandez family’s home without cause or producing a search warrant. They found the family gathered in the back yard, and Daniel Hernandez, not knowing his home was being invaded, accidentally sprayed either officer Wampler or officer Garcia with a water hose he was holding in his hand. This sent the officers into a fit of fury and uncontrollable rage. At first they walked over to him and maced him in his face. They then proceeded to rough him and his brother up. And last but not least, they even attempted to drown him in the family’s own mini-pool. They did all this to Daniel Hernandez in the presence of his terrified young daughter, whom he recalls was screaming in terror as the police officers were drowning her father.  A 2011 Civil Rights lawsuit carries a chilling description of the events.

DEFENDANTS and DOE Defendants 30-80 conspired to conceal the truth as to the
circumstances under which PLAINTIFFS were beaten, tortured, drowned, threatened,
and humiliated.
21. The SCENE DEFENDANTS… entered PLAINTIFFS’ property without invitation, cause, or warrant, and
threatened MANUEL HERNANDEZ and MARIA DE JESUS HERNANDEZ. The
SCENE DEFENDANTS pushed and shoved them and threatened and intimidated
plaintiffs MANUEL HERNANDEZ and MARIA DE JESUS HERNANDEZ by telling them
that they would arrest and file charges against them and their family if they said
anything about the conduct of the police officers…. 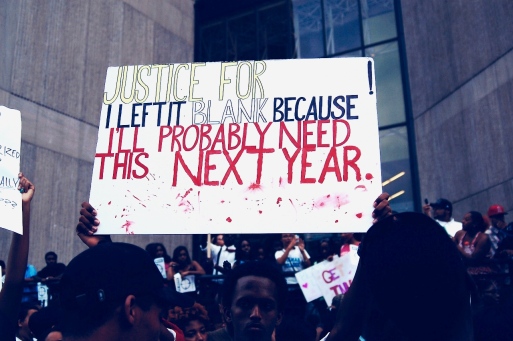 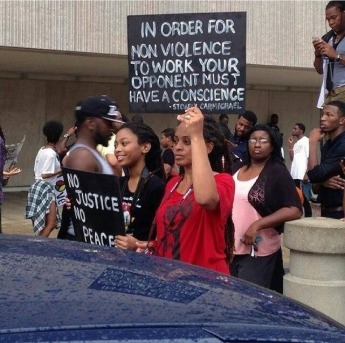 What are we to make of all this? Well for one thing the LAPD is still hopelessly racist and corrupt. But beyond that there is the realization of what many have long asserted, that American “exceptionalism” is nothing but a farce. People all over this nation are incapable of leading normal, healthy, peaceful lives when they are made to live in a state of constant fear that at any moment a police officer is going to stop and harass them while they are walking down a street, or when they are driving down the road in a car, or even while they are sitting within their own home. The police in 2014 are literally terrorizing and destabilizing entire communities with their morally unethical tactics. If not brought to an end, it doesn’t bode very well for the future.

The former pastor of the First AME Church, Rev. Cecil “Chip” Murray, asked a question while speaking at Ezell Ford’s funeral on Saturday which we all should be asking of ourselves and of our nation, “America, oh, America, you’re getting richer, but are you now getting a little old for this?”

** The Department has even gone as far as trying to smear Ezell Ford’s grieving family and friends who call for justice by falsely accusing them of having “gang affiliations” simply because of a music video they made containing the popular phrase “Fuck the Police”. Truthfully the PD should be thankful that harsher words haven’t been said about their gestapo-inspired tactics.