**The following article has been re-posted from the Liberation News website. All credit goes to Doug Kauffman of LiberationNew.org for writing it. 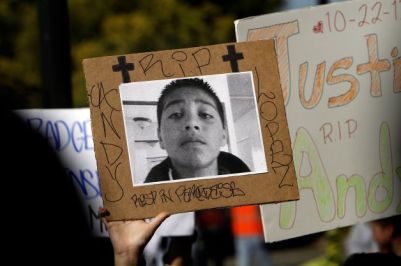 On July 7, recently re-elected Sonoma County District Attorney Jill Ravitch declared that there would be no charges filed against Sonoma County Sheriff’s Deputy Eric Gelhaus for his execution of unarmed 13-year-old Andy Lopez. The decision comes as little
surprise to the family and organizers in Santa Rosa who have led three mass demonstrations in response to the injustice, including the first demonstration held just a few hours after the announcement of Andy’s death, that garnered hundreds of supporters.

Ravitch ran an election campaign with the support of local law enforcement and clearly waited to announce the decision until after the election campaign was finished due to a wave of pressure placed on the candidates to prosecute Gelhaus. Ravitch should be immediately recalled for her clear favor to Sonoma County Sheriff’s Department and her unwillingness to prosecute the killer of a child.

Criticism was raised against Gelhaus in the immediate aftermath of the shooting for sporting a mocking “coexist” bumper sticker that depicted a skull and cross bones as well as a target instead of the various religious symbols usually depicted to indicate tolerance. This bumper sticker was acquired from the store section of The Patriot Post, which is a Christian Right and fascist publication produced primarily by high ranking ex-military members. A special program of the publication in support of the U.S. wars in Afghanistan and Iraq allowed people to donate money to have commemorative coins sent to troops in battle which depicted on one side their military branch emblem and on the other a symbol depicting a European crusader going to battle. During the Iraq war, Gelhaus volunteered to return to military service and referred to the country he helped occupy and destroy as “Jihadistan” in a SWAT magazine forum – promoting the dehumanization of Muslims.

Gelhaus has a special obsession with Zimbabwe and the politics of African colonization. He repeatedly refuses to call the country by any name but its old colonial name of Rhodesia and openly states his belief on online forums that the country was better under white colonial rule. He even went as far as to contribute an article to Modern Service Weapons online publication glorifying the colonizers’ use of the Browning A-5 Shotgun against the indigenous people of Zimbabwe during their war for independence from European domination.

Jeff Cooper and the Gunsite Academy

Jeff Cooper was founder of the American Pistol Institute, now called Gunsite Academy, where Eric Gelhaus is an instructor on the days he isn’t racially profiling and executing children. Jeff Cooper contributed to Guns & Ammo Magazine a regular column called, “Cooper’s Corner.” These commentaries developed into a monthly newsletter called “Gargantuan Gunsite Gossip” that was distributed at the school for over 20 years, including years that Gelhaus spent at the academy. On one online gun forum Gelhaus lamented the fact that he couldn’t post entire pages from the volumes of collected commentaries of Jeff Cooper that are published, to this day, by Gunsite Academy. Gelhaus‘ affinity for these books is further evidence of his affinity for white supremacy, vigilantism, fascism, and more because the books are cover-to-cover hatred, including racist illustrations.

“In the last rifle class we issued three expert tickets (complete with our new enameled
Scharfschutzenabzeichen)” [an award given out to SS snipers during WWII].
“So Rudel is dead. Hans-Ulrich Rudel, Colonel, Luftwaffe, holder of the Knights Cross of the Iron Cross,
with swords, diamonds, and golden oak leaves. The one holder of the one medal. In our opinion, Rudel
was the greatest individual warrior who ever lived . . . It is a bit sad to note that the chief attention given
to Rudel’s death in the domestic press was the fact that he was a Nazi.”
“Considering the general state of social and ethical behavior in the ‘developing countries,’ one might
conclude that while colonialism certainly had its faults, it seems – like growing old – to have been
preferable to the alternative.”
“But now we see that the city of Los Angeles has decided to overrule the Federal Bureau of Customs and
Immigration, and declared LA to be a haven for illegal aliens. Hmm . . . Los Angeles Police Department is
indeed a fine organization of its type, but I do not think it can stand up against the 82nd Airborne – if we
have to resolve this argument by force.”
“It seems to me that diversity, rather than being a goal to be sought, should be an obstacle to be
circumvented.”
“It seems evident that the basis for civil safety is homogeneity. A culture which is socially uniform is pretty
well devoid of informal violence.”
“The consensus is that no more than five to ten people in one hundred who die by gunfire in Los Angeles
are any loss to society. These people fight small wars amongst themselves. It would seem a valid social
service to keep them well supplied with ammunition.”

Not only do the idealogues of Gunsite glorify Nazi soldiers like Rudel, they mimic their awards. They are pro-colonization and anti immigrant – in fact, the only official political statement ever released by Arizona-based Gunsite was in ecstatic support of SB 1070. The quotes above only scratch the surface of the fascist beliefs guiding Gunsite and its instructors.

It’s no surprise that Gelhaus is not the only killer or corrupt cop providing instruction at Gunsite. Over half a dozen police and border patrol agents from around the country who instruct at Gunsite have been involved in officer-involved shootings and other illegal acts or subject of discrimination lawsuits.
Media attack on Andy Lopez doesn’t justify shooting 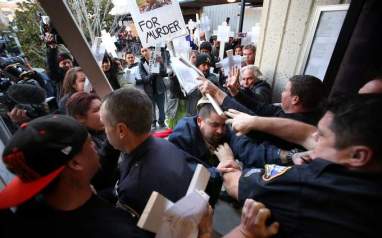 Since the release of the investigation on Monday by DA Ravitch, the media has latched onto Andy’s drug test results, including positive results for marijuana, and presented them as though they are at the heart of some “mistake” that resulted in his death.

This narrative runs counter to that of multiple eyewitnesses who have stated that the time between Gelhaus’ command and the shooting was only a few seconds, which is not even enough time for a completely sober person to respond. There are also no drug test results on Gelhaus for the DA or the community to examine and take into consideration.

While it could be a steroid-induced rage that led Gelhaus to shoot Andy before he had finished turning around, the truth is it was more likely the fact that Gelhaus is a vehement racist who dehumanized all non-white people. Why else would such a gun enthusiast, willing to state on public forums that attempts to restrict gun ownership should be met “with protest,” shoot a child for carrying a toy gun? If Andy were white, Gelhaus might have stopped the car to have a friendly conversation about guns.

Andy’s use of marijuana is irrelevant to the case. He was unarmed, had committed no crime, and was provided less than six seconds to respond to a cop’s command that may not have made any sense because Andy didn’t have a “gun” to “drop” – he was carrying a toy. Multiple witnesses could see that the gun was a toy and the community knew that the nearby field, now a park named after Andy, was used for air soft guns. But the most damning evidence is Gelhaus‘s own instruction in an online gun forum about how to get away with killing someone who is carrying a toy gun – displaying a degree of premeditation that can only make his shooting of Andy an obvious murder.

But the use of force, the press release on the incident, the investigation, and the decision to prosecute is in the hands of the police and DA in every case. Time and again DAs allow racist killer cops to walk free, because the fact is that their role in society is to “prosecute crime.” The overwhelming majority of their job is to work with police in sending poor and working people to prison. Their inherent task in every case of police brutality is to stall as much as possible, ignore as many facts as possible, and wait for a key moment (whenever the mass movement has waned a bit) to release the news that they will not prosecute. If a DA in any county began prosecuting large numbers of killer, criminal cops, they would be promptly removed.

The movement in Santa Rosa led by Andy’s close friends and loved ones is the only force that can build the power necessary to put Gelhaus in prison, and that movement is prepared to go well beyond Ravitch to ensure justice.

(The above content was first posted onto the LiberationNews.org and has simply been re-posted here by the administer of the UShypocrisy.com website in order to help spread the word.)