The pressure on the billionaire owner of the “Redskins” football team, Dan Snyder, to change his team’s name has been mounting in recent weeks, especially after the National Congress of American Indians‘ hard-hitting television ad titled “Proud To Be” aired during the NBA Finals game on June 10. One week after it aired in the prime-time slot, the United States Patent and Trademark Office took the step of formally cancelling six of the team’s trademark registrations due to its being named a derogatory racist slur. And while Snyder vows to fight to the end, there’s growing optimism that his days of directly profiting from the ‘R-s***s’ franchise are numbered.

But as is the case any time a government entity or institution signals it will no longer be an accomplice to preserving such overt symbols of racism, the right-wing traditionalists of white conservative America are quick to make a huge fuss about how their rights, freedoms and liberties are slowly-but-surely being taken away from them! (If this isn’t a perfect example of white privilege…) As can be expected, the defenders of racis… I mean “liberty” have to resort to the most illogical arguments to rail against what they perceive as “political correctness” – case in point, many of the hilariously absurd rants left by users in the comment section of an article posted on the NBC Sports website.

The article quoted current New Orleans’ Saints cornerback Champ Bailey, who used to play on Snyder’s team, as saying, “When you hear a Native American say that ‘Redskins’ is degrading, it’s almost like the N-word for a black person. If they feel that way, then it’s not right. They are part of this country. It’s degrading to a certain race. Does it make sense to have the name?” This was apparently enough to infuriate a number of readers, who expressed their displeasure in the following comments: 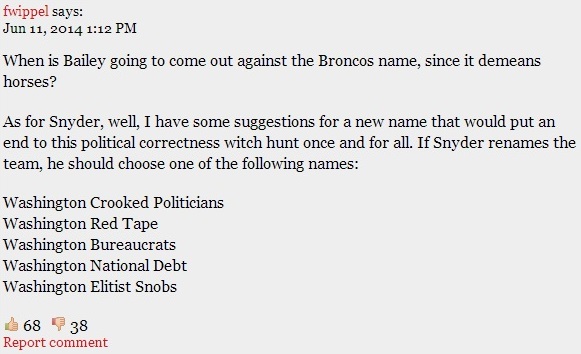 [As is typical of these comments, they rely on a bunch of false equivalencies to make their case.]

[NOTE: Considering how the NAACP was founded over a century ago to combat discrimination faced by people of color, while the R-word Team was founded solely for the purpose of making a few white men enormously wealthy, this comparison is of course illogical and not-very-well thought out.]

[It’s amazing how these super-defensive whites always try to bring every conversation about race back to “but if Black people can say the n-word why can’t I?!?! It isn’t fair!” I suspect those who make this argument know the answer to this question, but resort to asking it anyway because they want to deflect the focus from their own racism.]

*Have you heard any wackier arguments made by irrational right-wingers? Please, do share in the comments below: