It’s been precisely one month since the state of Oklahoma majorly botched the execution by lethal injection of Oklahoma inmate Clayton Lockett, a tragic circumstance that opponents of the death penalty had already predicted months in advance. Proponents of capital punishment would like to place the blame for their failure to “properly” execute a man squarely on the European Union, which has banned the sale of manufacturing drugs for the purpose of carrying out state-sponsored executions in the United States. The States that carry out death by lethal injection, instead of abandoning the practice altogether, have been mixing different drugs and concocting new venomous cocktails to use on their unwilling subjects. Thus death row inmates have been designated the new guinea pigs for executioners to experiment with by injecting only God knows what into their veins. But with the gaze of the global community fixed firmly on the states imposing capital punishment, several of those states are now seeking to revive the most draconian methods of execution as their primary mode of killing inmates.

If you were under the illusion, as some spectators were, that the recent string of botched executions from Texas to Ohio would cause states to reconsider their long-standing practice of carrying out the death penalty, then you severely underestimated just how addicted these states are to spilling the blood of their prisoners. Barely even 3 weeks were permitted to pass since the death debacle in Oklahoma before Tennessee legislators passed a bill mandating prisoners sentenced to die be put to death by the electric chair if the drugs needed for a lethal injection are not available. And on May 22 Republican Governor Bill Haslam signed it into Tennessee law. A similar return to such a rudimentary measure as a first resort has been proposed several times this year alone in the state of Wyoming, where legislators have proposed death by firing squad as a mandatory method. What most Americans seem not to be aware of, however, is that being put to death by electrocution, firing squad, hanging or even the gas chamber are all technically legal in quite a number of states.

Tennessee in fact electrocuted a man in an electric chair as lately 2007 with the death of Daryl Holton. Death by the electric chair has never been explicitly barred from being implemented in Tennessee since the practice came into effect. It has this in common with seven other states: Virginia, South Carolina, Kentucky, Florida, Arkansas, Alabama, and Oklahoma. The only difference is that now inmates in Tennessee won’t be given an option of whether they prefer death come from an IV needle filled with toxic venom or from a chair that will shoot electric bolts into their body. Inmates very rarely choose the electric chair over the IV needle. Since the United States Supreme Court reversed its moratorium on capital punishment back in 1976, 158 inmates have been killed by the electric chair method, as opposed to 1,204 who were killed by lethal injection. Even more surprising is the fact that three states – Wyoming, Missouri, and Arizona – still allow for inmates to be put to death by the gas chamber. Delaware, New Hampshire and Washington still have hanging as a legally available option. According the the reliable Death Penalty Information Center, 11 people have been killed in the gas chambers since 1976, and 3 have lawfully been hanged in the same period. It is a not very well publicized fact that the last time a person was sentenced and killed by a firing squad was just four short years ago in 2010 in the state of Utah. Virginia killed a mentally disturbed inmate in an electric chair just last year. Altogether 1,379 people have fallen victim to state-sponsored murder since the end of the moratorium in ’76. More than a quarter of these, 515, were in the state of Texas alone, followed by Oklahoma with 111 and Virginia with 110.

That many states still sanction murder and are in fact actively taking steps to preserve their means of doing just that is a clear a sign of retrogression in the United States. According to CNN: “Japan is the only other industrial democracy that has the death penalty.” While it’s debatable whether the United States is truly a “democracy” or not, what is not in dispute is the fact that the U.S. carried out 38 executions in 2013, whereas Japan carried out 8. The Death Penalty Information Center’s executive director, Richard Dieter, calls death by the electric chair “antiquated” and says “that if it were occurring in any other country, people would be outraged and call it torture.” It’s also a method which, like lethal injection, is pretty easy to botch. Take, for example, the execution of Cuban refugee Pedro Medina at Florida State Prison in 1997. As bolts of electrocution were shooting throughout his entire body, the leather mask which was placed on placed on Medina’s face combusted into flames, shooting up to 6 inches of fire into the air and “filling the room with smoke and the smell of burning flesh.” In the words of Professor Deborah Denno of the Fordham Law School, “Severe burning, boiling body fluids, asphyxiation, and cardiac arrest, can cause extreme pain when unconsciousness is not instantaneous.” This clearly should fall under the criteria set by the U.S. Constitution explicitly forbidding “cruel and unusual punishment.”

Meanwhile a large majority of the American public, according to polls, still view the death penalty favorably. And, according to an NBC News poll, just “one in three people say that if lethal injections are no longer available… executions should be stopped altogether.” The remainder are in favor of more makeshift modes of execution barring a solution to the lethal injection shortage, though they are divided over their method of choice. 20% say that death by gas chamber is their preferred method for killing people; 18% say the electric chair; 12% are for the firing squad; and 8% say hanging would be the next best appropriate measure. If these polls are to be taken seriously, it speaks to a shockingly primitive mindset among a large swath of the American public. Aside from that already mentioned, the NBC News poll contains some other noteworthy findings: 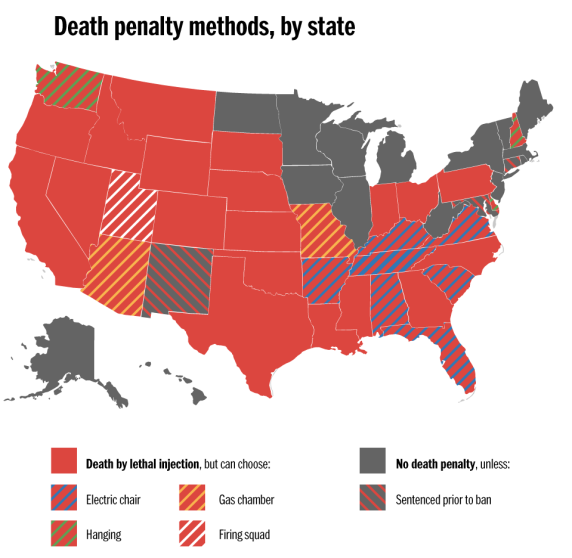