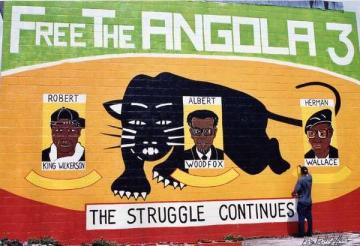 Herman Wallace was a truly Revolutionary Freedom Fighter in every modern sense of the term. After an indefensible 42 years of being kept in solitary confinement inside of Louisiana’s notoriously cruel Angola State Penitentiary as retribution for his role in forming the Angola State Prison Chapter of the Black Panther Party, Wallace was released from behind prison walls at long on Tuesday, October 1st after an order by a Louisiana Federal Judge, citing the fact that women were systematically excluded from serving on the jury that sentenced him to life imprisonment back in 1974. The ruling came as a result of the unyielding efforts of advocates on behalf of the Angola 3, but was done with the full knowledge that Wallace had been fighting with advanced liver cancer for a number of years and would likely die within a matter of days. On Friday, October 4th his earthly struggle came to an end. This was nothing less than murder on the part of Angola Prison, the state of Louisiana, and even the United States of America as a whole, for the ramifications of such cruel acts inflicted upon a person cannot be restricted to one such environment or prison. Angola State Prison Penitentiary, once site of one of the largest slave plantations in the pre-Civil War Southern United States, made the transition from a slave plantation to a Maximum-security prison that profited from the inmate-labor immediately after emancipation, and it has never truly modified its initial purpose.

Herman Wallace and Albert Woodfox both formed the Angola Chapter of the Black Panther Party in the late 1960’s “to oppose the systematic violence and sexual slavery that pervaded the institution.” They, along with an inmate named Robert King, had initially been incarcerated for minor criminal offenses before being targeted by Angola Prison authorities for their activism and political organizing against the incessant brutality and abuses prisoners suffered at the hands of the Prison System. Woodfox still remains in Solitary Confinement after an unconscionable 42 years, even though judges have recommended he be released on more than one occasion. Robert King was at long last released back in 2001 and has since advocated for the release of his two brethren left behind what is undoubtedly earth’s closest place to hell. For more information on the Angola 3 and how you can help get involved in ensuring their unconditional pardoning, visit Angola3.org.