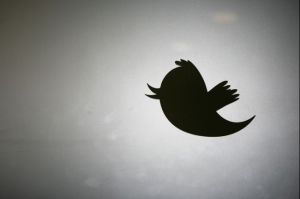 When it comes to using Twitter, I’m a rather late comer and definitely not up-to-date in utilizing it the way it was meant to be utilized. Truth is I only got one to promote my blog. As I signed on last night on my mobile device, I decided I would take a look around the site for once. Little did I suspect that under the section called “Trending Topics”, which I am presuming must be the most popularly used tags, one of the hot “trending topics” was apparently, of all things, “#HowToMakeABlackPersonMad”. Truthfully I knew I shouldn’t even look at it because it was just going to make me angry and cause me to want to say something smart to counter each and every one of these George-Wallaces-with-a-keyboard. But what struck me was just how young most of these commenters were. I’m 23 years old and I’ve certainly never been under any illusions of “we’re becoming a color-blind society..” and all that other feaux rhetoric. But these really are CHILDREN here repeating verbatim the exact same lines and stereotypes whites used to denigrate Black life in the public eye 250 years ago. While it is tempting to sweep things like this under the rug as not being representative of society or the nation at large, I feel it is necessary to let these images stand as testament to the fact that racism is far from being a thing of past generations only,and it isn’t “slowly dying out” or “fading away” with the passage of time. The youth today are every bit as susceptible to internalizing hatred and bigotry as a part of their conscious and subconscious thoughts as any previous generation. Racism, prejudice, bigotry: these things do not simply “fade out” or vanish with time. They can only cease to exist under a new system, one which is without capitalism and doesn’t require labeling groups of people as “other” and “less than” as essential to its survival. THE IMAGES BELOW: 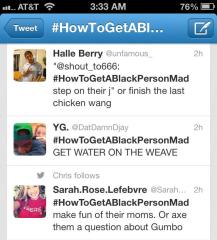 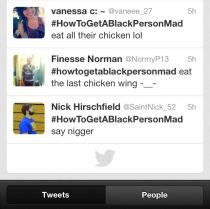